In contrast to power chords, minor chords, like major chords, are combinations of three or more notes. Any chord has two attributes which identify it: The root and the chord family. The lowest note of the chord forms the root of it. So for example, a major chord with root note C is called a C major chord and starts on the C note.

To find a minor chord, start by building a major chord. Do this by identifying the 1st, 5th, and 8th notes in the scale. To get a minor chord, simply lower the middle note of the triad by a half step which equals one fret lower on the fretboard.

The formula for minor would be 1st, 4th and 8th note.

In this example, the 3rd note is an E. Lowering it by a half step leads to an Eb. So C, Eb, and G form the C minor chord.

The first minor chords you should learn are Em and Am.

Later you can shift them up the fretboard as barre chords, e.g. Fm and Bbm:

Here we have a poster with basic chords patterns. You can download, print and hang it in your room to help you memorize some chords. 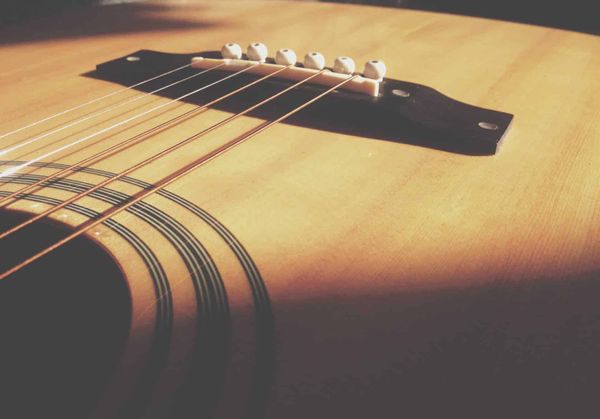 Do you struggle to remember the string names on your guitar? With this easy trick, you will never forget guitar string names again.

Rhythm is a crucial part of music. Knowing the basic rhythms such as quarter notes, eighth notes, and rests will give you a deeper understanding of music.