Every successful financing round is an important milestone on a start-up’s road to success. “It’s always a roller coaster ride, even if you can show excellent growth and very good KPIs like Fretello,” says Florian Lettner, co-founder of Fretello. “That’s why it is even more important to have reliable and experienced business angels on board who will have your back when unexpected things come up. After an exciting year, we are very happy now. We expect valuable strategic support for further growth from the entry of Sparkmind and the European Super Angels Club.”

A guitar teacher in your pocket

Fretello is a virtual guitar teacher to be used anytime, anywhere on your smartphone, tablet or computer. Playing the guitar is not easy. Beginners are often overwhelmed and don’t know how to learn properly. This is where Fretello comes into play: the triad “learn, practice, play” is offered as part of an interactive curriculum especially designed for digital lessons and developed in cooperation with Austrian music schools and teachers. Motivation to learn through gamification and songs from the Sony and Kobalt catalogs to play along complete the systematic concept. The well thought-through methodology motivates especially guitar beginners to keep going. An algorithm also analyzes playing aspects such as pitch, tempo and playing technique. The smartphone app gives musicians feedback and tips to improve their own playing, just like a guitar teacher would.

Around 725,000 guitarists have registered with Fretello since it was founded. Every other guitarist who tests the learning offer decides to subscribe. More than half of the guitarists are based in the US and Great Britain.

The fresh capital will be primarily used to expand the range of the learning offer and to form partnerships in the global music business: “When they buy their first guitar, most of the people don’t even know if it fits them, or if they even really want to learn this instrument,” Lettner states. “Our goal is to offer musicians a tool to learn whenever they hold a guitar in their hands for the very first time.” A corresponding pilot project with a music wholesaler has already been successfully rolled out.

The President of the European Super Angels Club, Berthold Baurek-Karlic, who is also responsible for the syndicate fund of the club—"EXF Alpha S.C.S.”—via the Luxemburg Venionaire Ventures Sár, adds: “The strategic fit for individual members was so great that we already achieved first sales successes in the due diligence phase. We see a clear advantage for the team through the direct sales support here and are pleased to have another high-growth company in our portfolio.”

Fretello on the Apple Stage

By developing the world’s first augmented reality music learning experience, Fretello was able to attract also Apple’s attention. Apple has been advertising Fretello’s products regularly in the App Store ever since. In 2019, Fretello made it onto the keynote stage at WWDC, Apple’s legendary conference for the developer community, as a showcase. The Fretello founder team, Wolfgang Damm and Florian Lettner, met at Austria’s Hagenberg University of Applied Sciences and first launched the mobile app in 2016.

About Fretello
Fretello (fretello.com) is an Austrian-based EdTech start-up. The start-up empowers people to express themselves through music. Fretello’s mission is to create an inviting and accessible digital guitar learning experience for beginner guitar players to make learning a musical instrument less overwhelming and intimidating. In 2019, Fretello presented the world's first fully immersive augmented reality guitar learning experience as a showcase for Apple's iPhone 11 release. The start-up supports beginning musicians in learning to play the guitar with a systematic approach to empower them to reach their goals. To offer the best possible support, the Fretello cooperates with certified music teachers and renowned music schools.

… well, that’s not hard in May because we added exciting new content to Learn Path 28. Here’s what’s new: Three-finger power chords: Add an octave to your 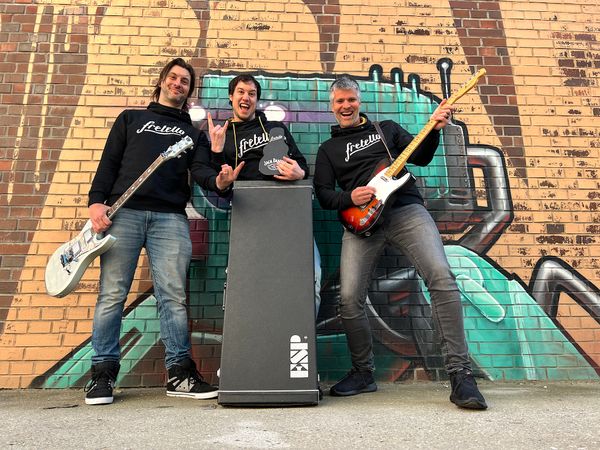