Although Eddie Van Halen wasn't technically the first person to do it, tapping is the technique he made famous. Tapping involves hammering on the fretboard with your picking hand to produce a note. Then you subsequently pull off to notes fingered by your fret hand. The involvement of the picking hand in this fashion is called a tap. It is usually represented by a "T" in tablature.

In most cases of tapping the fretting hand uses a series of hammer-ons and pull-offs in conjunction with the tapped notes from the picking hand to facilitate a series of quick, smooth, fluid notes.

Although "Eruption" from Van Halen's first album is probably the most popular example of tapping, we're going to show you a different song today. The intro of Hot for a Teacher is the track that started a huge tapping frenzy as nothing like it had been heard before. Scores of guitar players learned and copied the technique seemingly overnight. By the late 80's it seemed that every rock guitarist used the technique.

Hot For Teacher is technically and audibly very accomplished. Released in 1984 from the album of that year, it is the basis for many sexually suggestive songs about high-school teachers. In this tutorial, we break down the fast opening two-handed tapped riff and the arpeggios they cover.

When you start learning the riff, make sure that you really start slow in the beginning. Find out what the max tempo is that you can play the tempo. Your actual practice tempo is then half of your max.

Wes Borland created riffs full of high energy and drive that kept fans pumped up for more than a decade. Find out what you can learn from his style. 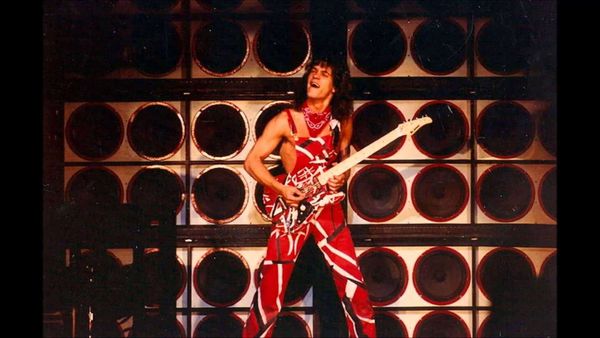 Eddie Van Halen is one of the most influential guitarists in the world. To celebrate his birthday, we'll reveal a few things about his success.