Learning scales is essential for your development as a guitar player. The first step in learning music faster with the guitar is knowledge of scales. So by practicing your scales, you’ll be able to build finger strength, start shredding and even write your own songs.

Essentially, scales are organized sequences of notes played in an ascending or descending order.

Therefore, we separated the 2 most essential guitar scales that every beginner should know: the Pentatonic scale and the Major scale.

This is the first shape of A minor pentatonic scale you should learn and practice on your guitar:

For a better overview, the A is highlighted wherever it appears. The numbers within the circles show you which finger you should use (1 = index finger, 2 = middle finger, 3 = ring finger, 4= pinky).

A famous song that utilizes the A minor pentatonic scale is “Stairway to Heaven” from Led Zeppelin. After getting the hang with the pentatonic scale, it is recommended to get into the C major scale to expand your expressiveness.

The major scale is a set of seven notes with characteristic intervals between them (W W H W W W H, where W = whole step, H = half step). You can read more about the Major scale here.

The C major scale is an absolute must for guitarists and musicians in general. It's considered the easiest key for musicians to learn because it doesn’t contain any confusing sharp or flat notes.

As with the A minor pentatonic scale, there're different shapes to play a C major scale, here’s the first shape:

For a better overview, the C itself is highlighted wherever it appears. A famous song that uses the C major scale is "Let it be" from The Beatles.

Rhythm is a crucial part of music. Knowing the basic rhythms such as quarter notes, eighth notes, and rests will give you a deeper understanding of music. 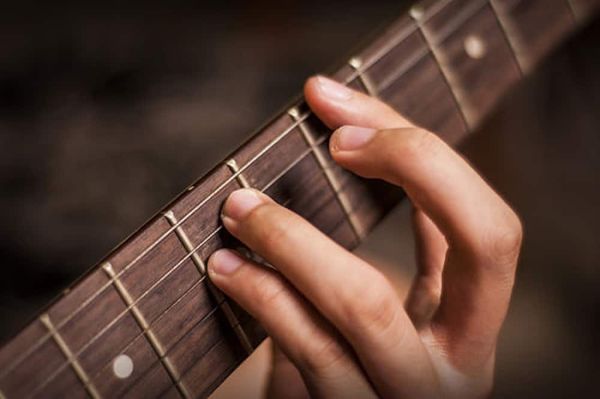 Power chords have been used in some of the most epic guitar riffs of all time like Iron Man, Hit Me With Your Best Shot and Smells Like Teen Spirit.