The key of G major mostly uses the notes of the G major scale, which are G, A, B, C, D, E, and F♯. The key signature has one sharp, F♯, and its relative minor key is E minor.

Popular streaming service, Spotify, revealed that they have more tracks composed in G major than any other key on their platform with C major coming in second. In fact, the G major scale has been one of the most popular for centuries. In Baroque times, it was considered the key of benediction.

Famous songs written in the key of G

G major is the official key of both "God Save the Queen" and the New Zealand anthem and it's popular in classical, country, rock, metal, and many other genres. Such famous songs in the key of G Major include Sweet Home Alabama, Knockin’ On Heaven’s Door, and Eine Kleine Nachtmusik.

One of the reasons the key of G is so popular is because it is relatively easy for guitarists and other musicians to play. Part of this comes from the fact that it only has one sharp (F). Also, the finger position on the guitar frets is not overly complex. When reading sheet music, you can quickly identify G major from the sharp on the top line as seen below.

An easy way to find out if a song is in the G Major key is to look for cadences. A cadence is a melodic or chord progression that moves towards a point of rest or resolution and is the most common way to define a key.

The key signature shows the sharp or flat notes in the scale. For G, you only have F sharp (F#). A simple way to identify the key if you are not familiar with reading sheet music is to figure out the sharp or flat note and go one half-step up. From F#, you take half-step to G. The rest of the notes in the scale are A, B, C, D, E, and F# at the top.

What are the chords in the key of G?

When you have seven notes in a scale, you have seven chords associated with them. A chord is traditionally played with three notes at the same time. In the key of G, you get the following:

Most of these are beginner chords you will probably learn near the start of your guitar playing experience. B minor and F# diminished will come later.

What is the relative minor of the G major?

A major scale and its relative minor use the same notes to create a different sound. The note order changes. E minor relates to G major because they both share F sharp as their only half-step note. The notes in order are E, F#, G, A, C, and D.

● Strum all the strings together 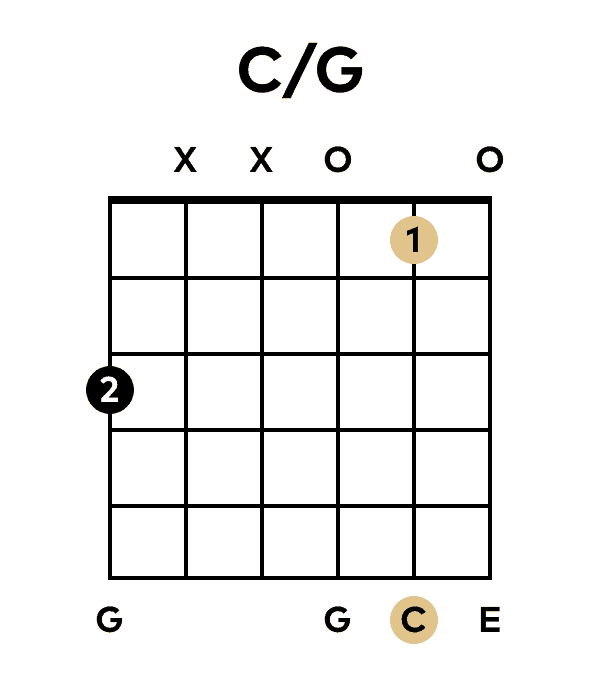 The C/G chord, which is read as ‘C over G’, is the second inversion of a C major chord. Learn how to play the chord with suggested finger positions.

In the latest Learn Path level, you’ll learn how to create some magic with your fretboard.